Bright and early on the first day of PDAC 2017, it was standing room only at the “Metal Riches of the Western Tethyan Belt” session, which began with Pat Forward, COO of Euromax Resources, introducing the ‘3 pillars’ of projects in this region: resource quality, skilled people and a low-cost setting.

He passed the microphone to Mac Canby, VP Eurasia Exploration for Freeport McMoRan, to discuss the metallogeny of the region. Among several memorable lines was Mac’s comparison of the Western Tethys to the Cordillera – but like an accordion, twisted and bunched instead of smooth!

The country talks began with Serbia, with Trade Commissioner Djurdja Ceramilac providing an detailed overview of the business environment and incentives available for miners in the country, including reduced taxes and administrative burdens, the double taxation agreement and more. Frazer Bourchier, COO of Nevsun, then took the mic to speak on his company’s project Timok project, which is anticipated to add 300% to growth in copper production in the next 4-5 years, with the Upper Zone pre-feasibility underway and Lower Zone drilling by early 2018. Teo Dechev, CEO of Mundoro followed, highlighting her company’s extensive and prospective land holdings and exploration projects across Serbia and Bulgaria. Mundoro is carried through commercial production on its Timok North projects through the JOGMEC joint venture.

Bulgaria was up next, with Richard Gosse, SVP Exploration for Dundee Precious Metals, describing a country offering stability, a rich mining history, regulatory transparency and prospectivity. Continuing to a discussion of Dundee’s projects, he noted that Chelopech’s operating results were in the upper end of guidance for 2016 at 38.5Mlbs copper and 166koz gold at cash costs of $610 per ounce gold sold, and an ongoing focus on optimization through innovation. Meanwhile, earthworks were commenced at Krumovgrad in late 2016 with this project anticipated to produce 86koz gold annually over 8 years.

The Honourable Vladimir Peshevski, Deputy Prime Minster of Macedonia spent the next few minutes discussing the country’s economic strategy, which includes creating macroeconomic stability through GDP growth, low indebtedness and low inflation, as well as reforms to create an investment-friendly environment.  As a result of this strategy, Macedonia has improved its standing to #1 in Continental Europe and #10 in the World in the World Bank’s 2017 “Ease of Doing Business” rankings.  Euromax’ Dimitar Dimitrov, Executive Director of Euromax Exploration Services, then outlined the discovery of the Illovica-Shtuka copper-gold porphyry deposit, followed by host Pat Forward, who highlighted the simplicity of project, which benefits from a 1:1 open pit strip ratio, crush-grind-flotation process with truck transport to the Pirdop smelter in Bulgaria, low costs and a natural gold-copper hedge.

We then had a triple mix of Turkish projects, beginning with Han Ilhan, CEO of Aldridge, who first provided an overview of the country, which offers a productive and low cost labour pool as well as investment incentives, and which is ranked the #1 gold producer in Europe, having developed over 10 mines in the past 15 years.  Han then spoke about Aldridge’s Yenipazar project, a high grade open pit VMS polymetallic deposit in central Turkey, which boasts low capital and operating costs and upside potential with nearly 90% of the property unexplored. Alamos’ Mehtap Ozcan, Manager of Exploration, then took the stage to discuss the Kirazli, Agi Dagi and Camyurt gold projects, located on the far west of Turkey, which boast almost 2Moz in total Reserves. Eric Roth, COO of Mariana Resources, then proceeded to discuss the hot topic of the session, the Hot Maden gold-copper project. Located at the far east end of Turkey, Hot Maden has an IRR of 153%, with gold-equivalent grades of 15 g/t and over 3.4 Moz in Indicated Resources, with a pre-feasibility study and further drilling underway.

The Hon. Vardan Gevorgyan, Deputy Minister of Energy, Infrastructure and Natural Resources spoke about mining in Armenia, which sees the sector as an opportunity to strengthen its economy and both recover and develop other feeder industries. The country already has 10 operating mines, and offers skilled professionals, streamlined and clear regulatory processes as well as a transparent royalty structure and a competitive tax regime.  Lydian International’s Hayk Aloyan, Managing Director of Lydian Armenia, presented the final corporate talk, highlighting the Amulsar gold project’s annual production of 225koz at all-in costs of US$585/oz with an IRR of over 21.6% at today’s prices and over 2.6Moz gold in reserves. The project is currently in construction, having been discovered initially from the road side as a highly visible alteration.

Pat Forward thanked the group in closing, drawing cards for wine and brandy door prizes, sourced from the Ezimit Winery in Macedonia. Many lingered to stay on for further discussions on the Western Tethys, a popular topic for over 200 people in attendance that Sunday morning at PDAC! 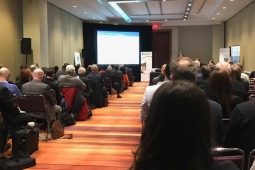 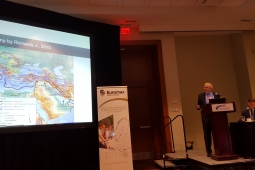 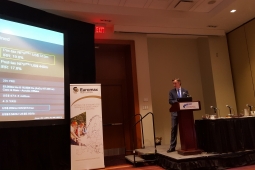