Following further work on the Ilovitza copper-gold porphyry project in Macedonia, independent consultants, Tetra Tech, have re-estimated the mineral resource on behalf of the Company and categorised all resources using the Canadian Institute of Mining, Metallurgy and Petroleum ("CIM") classification.  This updates and increases the Company's previous mineral resource estimate announced on 5 August, 2013 and described in a technical report entitled, "Resource Update on the Ilovitza Project, Macedonia", filed on 16 September 2013.  A constraining pit shell and a dollar equivalent cut-off have been applied to the 3D block model to ensure reasonable prospects of economic extraction for the reported resources.  A technical report detailing the resource, compliant with NI 43-101, will be filed on SEDAR within 45 days.

Commenting on the results, Pat Forward, Chief Operating Officer of the Company said,"The increase in measured and indicated resources at Ilovitza from 184 to 237 Mt, for no loss of grade, underlines the excellent continuity of the porphyry mineralisation and has the potential to define larger reserves and extended mine life.  Furthermore, the delineation of the significant higher-grade zone close to surface confirms the possibility of optimising the potential cash flow from project. We are now working hard on the other aspects of the Ilovitza Pre-Feasibility Study ready for publication in Q1 next year."

The new mineral resource estimate for fresh and oxidised portions of the mineralisation included the following updates:

The revised mineral resource estimate for the fresh (unoxidised sulphide) material can be summarised as follows:

Measured and Indicated Mineral Resource based upon a dollar equivalent cut-off of $16/t.

Oxide Resource Whilst they are not being considered for processing as part of the current pre-feasibility work, oxide resources within the constraining pit shell were also estimated as follows:

Oxide Mineral Resource based upon a dollar equivalent cut-off of $8/t.

Grade Tonnage Sensitivity The resource is also reported at several cut-offs on a dollar equivalent basis: 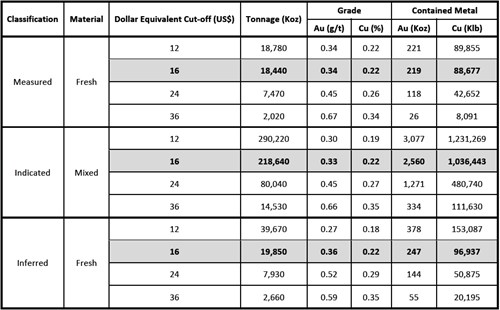 Figure 1 presents the distribution of the dollar equivalent block values along a west - east section through the centre of the deposit. The section illustrates that there are blocks of higher grade and dollar equivalent value close to surface that would be exploited early within the mine life, following pre-strip.

Sampling, Analyses and Quality Assurance and Control ("QAQC") Drill hole orientations were surveyed at approximately 50 metre intervals. Samples were collected by the Company's geologists in compliance with the Company's standard procedures and in accordance with accepted industry best practice. Samples were collected as half HQ or NQ diamond drill core through the mineralised intervals as three metre lengths and occasionally to a maximum of 4.5 metres to reflect geological boundaries. At the Euromax Strumica sample preparation lab, the half core sample was reduced to -2 millimetre and two, 200 gram samples are split from the whole. One 200 gram sample was submitted to the Eurotest Control EAD Laboratory (ISO 9001:2008 and ISO 17025 accredited) in Sofia, Bulgaria, for sample preparation, comprising pulverisation to 95% -75 microns, and analysis.  Gold analyses were carried out using the fire assay technique with an AAS finish on 30 gram aliquots.  Copper was analysed using AES ICP methods.  In addition to the laboratory's internal QAQC procedures, the Company conducted its own QAQC with the systematic inclusion of field duplicate samples, blank samples and certified reference samples. The analytical results from the Company's quality control samples have been evaluated and demonstrated to be within acceptable industry standard variances.

Key Assumptions used to estimate the minerals resources are:

These estimates have an effective date of 27 November 2013.  The last data included in the estimate was received on the 2 October 2013.  The resources have been estimated by Mr. Robert Davies, Bachelor of Science (B.Sc.), European Geologist (EurGeol), Chartered Geologist (CGeol), supervised by Mr. Simon McCracken, Bachelor of Applied Science (BAppsSc), Member of the Australian Institute of Geoscientists (MAIG), Fellow of the Geological Society (FGS).

Mr Patrick Forward, FIMMM, a Qualified Person under National Instrument 43-101 Standards of Disclosure for Mineral Projects of the Canadian Securities Administrators and COO of the Company, reviewed and approved the scientific or technical disclosure in this release and has verified the data included.

Euromax is a Canadian exploration and development Company with three main gold and base metal assets in Macedonia, Bulgaria and Serbia. We are focused on identifying, acquiring and developing mineral resources in Southeastern Europe with the objective of becoming a world-class mining company in the region. Our strengths are our local staff, knowledge and technical expertise in Macedonia, Bulgaria and Serbia.