Euromax Resources Ltd. 19 February 2013 (TSX-V: EOX; OTCQX: EOXFF): ("Euromax" or the "Company") is pleased to announce 2012 drilling results from its KMC project, located in southwest Serbia, some 200 kilometres from the capital Belgrade.  The licence covers around 60 square kilometres.  KMC's mineralisation includes thick sequences of gold-copper skarns, gold skarns, zinc-lead-copper-gold skarns and volcanic hosted gold mineralised silica breccias.  In late 2012 Euromax completed a diamond drill core programme comprising some 7,000 metres.  Drilling was targeted at delineating the skarns in the southern part of the property, named Copper Canyon, in order to define a maiden resource in that area and in testing other targets defined by geophysics and historic drilling to the north of this. 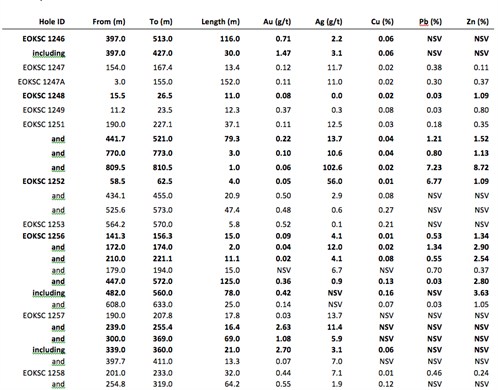 A brief synopsis of the exploration to date on the property is appended to this release, including a drill hole location plan for the above results (See Appendix - Figure 1).  The drilling has demonstrated sufficient continuity of mineralisation at Copper Canyon to proceed with the maiden resource estimate and this is scheduled for completion in Q2 of this year.  In addition, the drilling has confirmed significant widths of both gold-copper and base metal rich skarns in the areas to the north of Copper Canyon, namely Shanac and Madenovac (See Appendix - Figures 2-4).  Geophysical survey results using gravity and resistivity anomalies have been shown to be a highly effective tool in targeting skarns under cover, as confirmed by the drill results with the most strongly mineralised intercepts correlating well with the strongest geophysical anomalies.  Further drilling is scheduled for later in 2013, primarily aimed at delineating the skarns discovered to the north of Copper Canyon and allow preliminary resource estimates on these in the near future.

Commenting on the results, Pat Forward, Chief Operating Officer of the Company said,"We are delighted with the 2012 drill results from our KMC property in Serbia.  We are now confident to proceed with a maiden resource estimate on the Copper Canyon skarn and the results also confirm numerous other skarn targets on the concession.  The results suggest that KMC could be a significant contributor to the Company's resource base in addition to the development properties of Ilovitza in Macedonia and Trun in Bulgaria.  We look forward to announcing the maiden resource in the coming months and to further drilling results later in the year."

Drill hole orientations were surveyed at approximately 50 metre intervals. Samples were collected by Company geologists in compliance with the Company's standard procedures and in accordance with accepted industry best practice. Samples were normally collected through the mineralised intervals as one metre lengths and occasionally to a maximum of 1.5 metres to reflect geological boundaries. The samples were submitted to the SGS Laboratory (ISO 9001:2008 and ISO 17025 accredited) in Sofia, Bulgaria, for sample preparation and analysis. Gold analyses were carried out using the fire assay technique with an AAS finish on 30 gramme aliquots.  Silver and molybdenum were analysed using AES ICP methods. In addition to the laboratory's internal QAQC procedures, the Company conducted its own QAQC with the systematic inclusion of field duplicate samples, blank samples and certified reference samples. The analytical results from the Company's quality control samples have been evaluated and demonstrated to be within acceptable industry standard variances.

Mr Patrick Forward, FIMMM, a Qualified Person under National Instrument 43-101 Standards of Disclosure for Mineral Projects of the Canadian Securities Administrators and COO of the Company, approved the technical disclosure in this release and has verified the data included.

Description of the KMC Project and Exploration to Date

The KMC (Karavansalija Mineralised Centre) area is in a large, Tertiary-aged precious and base metal district located in southwest Serbia in an area with excellent infrastructure. The 60 square kilometre licence covers serpentinite in contact with carbonates which are overlain by younger volcanics intruded by dykes. To date, exploration has identified extensive copper-gold skarn, gold skarn, and gold-bearing siliceous breccias in several locations. The Company believes one or multiple buried porphyry intrusions, perhaps also mineralised, may be the source for these widely occurring mineralised zones.

An extensive geophysical programme, including induced polarization ("IP") resistivity lines, ground magnetics surveys, and detailed gravity surveys have been completed. Processed magnetic data suggests the presence of as many as eight large magnetic anomalies. Skarn mineralisation in the southern part of the concession at Copper Canyon appears to be associated with one of the smaller such. Several magnetic anomalies are also coincident with strong surface geochemical anomalies.  Gravity surveys have identified a series of anomalies which correlate with the known presence of skarns which are up to 500 metres in vertical thickness.  IP resistivity anomalies have proved very successful in delineating the limits of mineralization within the skarns. 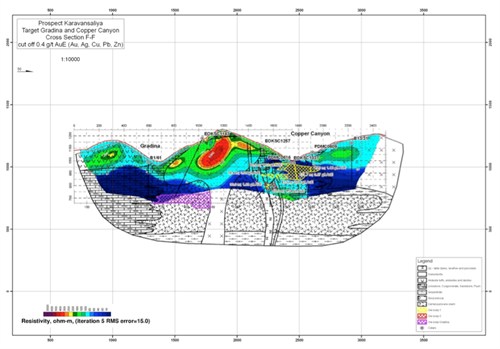 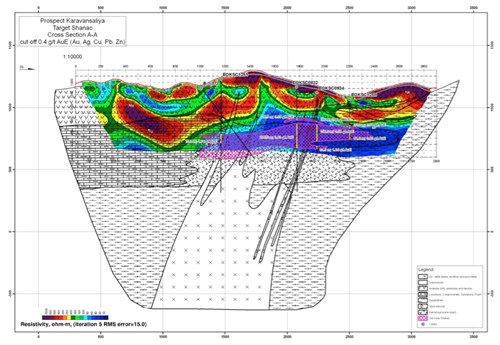 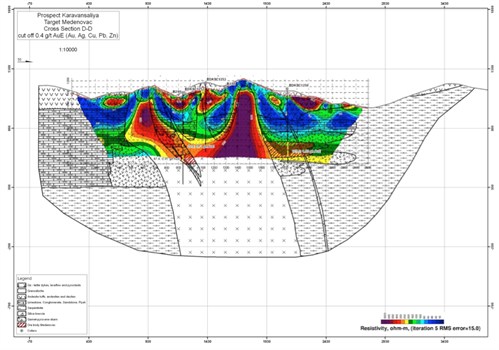