Euromax Resources Ltd. 21 March 2013  (TSX-V: EOX; OTCQX: EOXFF): ("Euromax" or the "Company") is pleased to announce 2012 drilling results from its 100% owned Ilovitza project, located in southeast Macedonia. Ilovitza's mineralisation is typical copper gold porphyry mineralisation.  In late 2012 Euromax completed a diamond drill core programme comprised of approximately 12,000 metres.  Drilling was aimed primarily at providing infill drill data over the central part of the porphyry which had been drilled previously to a nominal 200 metre drill intercept spacing.  The programme was designed to improve the resource classification of material within the potassic core of the porphyry, where grades tend to be higher than in the surrounding phyllic zone.  An additional two holes were also drilled to explore the potential extensions to mineralisation to the south and southeast of the main identified porphyry body. 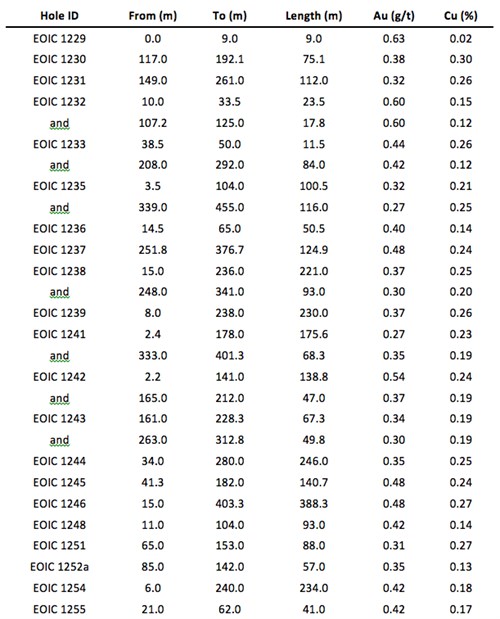 Drill hole locations are shown on the appended map with a background image of the magnetic intensity based on a ground survey.  All holes were drilled vertically and the pervasive nature of the porphyry stockwork means these are effectively true widths.  Mineralisation was confirmed in all holes within the central part of the deposit and these will be used in an updated resource estimate for Ilovitza and a pre-feasibility study, which is expected to be published later this year. This supports the Company's geological model for the extent and consistency of mineralisation within the potassic zone of the porphyry.  Holes EOIC 1240, 1247 and 1250 to the northeast, holes EOIC 1249 and 1256 to the southwest and holes EOIC 1229, 1234 and 1253 to the south and southeast of the main mineralised body failed to encounter significant mineralised intercepts and this effectively closes the mineralisation in these directions.  Mineralisation is open to the to the east of the main zone and these areas will be tested during the 2013 drilling season with drilling already underway with a 2,000 metre programme.   Deeper targets also exist to the south.

Commenting on the results, Pat Forward, Chief Operating Officer of the Company said, "The 2012 drilling at Ilovitza has successfully confirmed the mineralisation at Ilovitza within the porphyry potassic zone.  This enables us to complete the re-estimation of resources that will form the basis of our pre-feasibility study, well on schedule for completion half-way through the year with drilling, geotechnical work, topographic surveys and hydrogeological work all progressing well on site.  The preliminary economic assessment completed on the project by Tetra Tech in 2012 was based on material within this potassic core and the in-fill drilling reduces the nominal drill intercept spacing to 100 metres in this area.  The mineralisation is still open in some areas and this will be tested this year in order to explore potential resource upside."

Drill hole orientations were surveyed at approximately 50 metre intervals. Samples were collected by the Company's geologists in compliance with the Company's standard procedures and in accordance with accepted industry best practice. Samples were collected as half HQ or NQ diamond drill core through the mineralised intervals as three metre lengths and occasionally to a maximum of 4.5 metres to reflect geological boundaries. At the Euromax Strumica sample preparation lab, the half core sample is reduced to -2 millimetre and two, 200 gramme samples are split from the whole. One 200 gramme sample is submitted to the Eurotest Control EAD Laboratory (ISO 9001:2008 and ISO 17025 accredited) in Sofia, Bulgaria, for sample preparation, comprising pulverisation to 95% -75 microns, and analysis.  Gold analyses were carried out using the fire assay technique with an AAS finish on 30 gramme aliquots.  Copper was analysed using AES ICP methods.  In addition to the laboratory's internal QAQC procedures, the Company conducted its own QAQC with the systematic inclusion of field duplicate samples, blank samples and certified reference samples. The analytical results from the Company's quality control samples have been evaluated and demonstrated to be within acceptable industry standard variances.

Mr Patrick Forward, FIMMM, a Qualified Person under National Instrument 43-101 Standards of Disclosure for Mineral Projects of the Canadian Securities Administrators and COO of the Company, approved the technical disclosure in this release and has verified the data included. 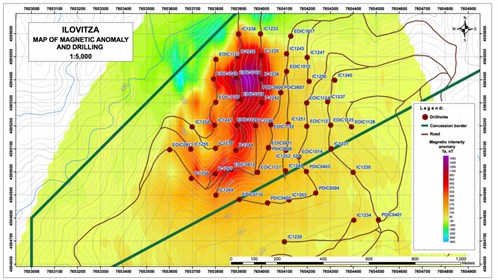